At the highest level

Bofors Hotel is the third hotel in the history of AB Bofors, and it was built in 1930 to impress international customers. Entirely customised for important meetings. Representation at the highest level.

Business where there is everything to play for and where nothing can go wrong.

During the first half of the century, the Bofors Hotel was an internal affair, exclusively devoted to the company's guests and top executives.

The circumstances for the hotel have changed over time. There has been a laundry, a florist, a large staff of waiters and kitchen personnel at the hotel. During one period, there was no menu for important dinners, instead the guests ordered what they wanted and the chef and the many-headed kitchen personnel stood at attention to meet their wishes.

During the 1990s, the well-preserved hotel finally opened up for companies and private individuals. And for many, it has become an obvious destination when they are in the region. Today, it is Karlskoga's (and probably the region's) international meeting place.

The hotel, which is in Italian villa style, was designed by the architect Wilhelm van Eyck, who was inspired by art deco and early functionalism. In 2007, large parts of the hotel were caringly restored in accordance with the architect's original intentions. A happy meeting between the 1930s and the 2010s.

Today, the Bofors Hotel is an oasis uniting times past in the magnificent, but homely, lounges and the modern Karlskoga with its vision for the future.

Bofors Hotel is owned and operated by Nobeli Business Support 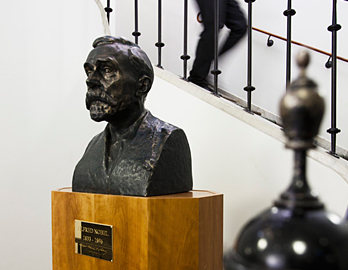